September 23 was a beautiful day in Grant Park, where once again, the Slacksters were there bright and early to provide the marching music to nearly 2,000 walkers supporting the National Alliance on Mental Illness. To find out more about this great cause, go to http://www.nami.org/Hometemplate.cfm

It's All About the Norton's

SlackDaddies fans jam the joint on Saturday nights when the band plays; of course Norton's is known for it's great food, friendly atmosphere and fantastic cocktails, but now it's also known as a great place to catch some blues fever. At a recent show, the Slacksters provided the beat while an enthusiastic throng of super swing dancers ruled the floor. Check it out ...http://www.nortons-restaurant.com/!

Saturday Oct. 8 saw the SlackDaddies - Danny Yohanna, Bill Uhler, Dennis Ori, Ken Johnson and Ally Harris play an old-but-new venue. Highwood's king of culinary conquest (Gabriel's, Pancho Viti's and Miramar), Gabe Viti, has transformed Pops for Chamagne into Gabe's Backstage Lounge, an exciting new entertainment spot, with a great stage and a true nightclub atmosphere. The SlackDaddies are proud to be among the first performers to take the stage at Gabe's, playing to a full house along with guest guitarists Bobby Wolf and Jim Conway.

SlackDaddies In All-Star Benefit
at Chicago House of Blues 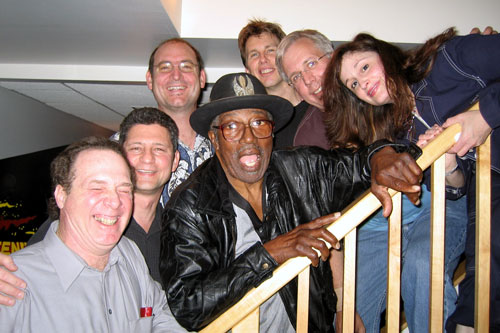 Bo Diddley joins the SlackDaddies at a pre-show dinner and informal
jam session. "You guys are tight ," Bo told the band after having them take a
crack at a new, unrecorded song he's working on.